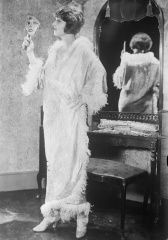 Pop artist Andy Warhol postulated in the catalog for an early exhibition of his photographs (Moderna Museet, Stockholm 1968), "In the future, everyone will be world-famous for 15 minutes." While Warhol's original meaning has been debated by social scientists and philosophers, in the 21st century's environment of rapidly changing media, anyone can become a phenomenon, internet star, or personality without discernable talent. Warhol's caution about fame's downside remains the same: as quickly as your star rises, it can fall—by his reckoning fame lasts about 15 minutes.

At the height of his career Paul Revere Williams was known for his tasteful designs for the homes and estates of the powerful of Hollywood and affluent businessmen of Southern California. Because print editors knew that features about actors, their rise from "rags to riches" and how they lived sold copy, images of his celebrity homes were often included with the stories. Williams' design ideas were broadcast through contemporary newspaper articles, photographic spreads in popular design magazines and by word-of-mouth. For almost 40 years his home designs were commissioned by Hollywood stars, movie industry powerful and wealthy Californians who aspired to live like Hollywood royalty. The emerging middleclass American woman wanting to live like a starlet could imagine by reading these "gossipy portraits" and emulating the Williams' style that she too might experience Hollywood.  (Jennifer A. Watts. Maynard L. Parker: Modern Photography and the American Dream, 2012)

During Williams' professional life time, the names, faces and life-stories of his celebrity clients were well-known to most Americans. Because their marriages, divorces, multiple homes, hobbies and pets were chronicled in local newspapers, fan magazines and newsreels, the American public felt a personal connection. Though not as well known, his wealthy California clientele appeared in society columns and their estates and weekend homes were featured in House Beautiful, Architectural Digest or California Arts and Architecture. Influential magazine editor Elizabeth Gordon used these homes as visual "instruction manuals" for her subscribers, the American middle-class woman. Gordon advised the readers to study and emulate the elite's architectural designs and interior furnishings. Williams' designs were an element of this moment in American cultural and aesthetic history.

Few people in 21st century Southern California know or care about the rich businessmen who formed the core of Williams' client base. The important film stars and film studio executives who hired him during his career have also recessed in public memory. (The names of the original clients only resurface when "young Hollywood" or new buyers pay premium prices for a classic Williams design.) But who were Williams' movie clients and would we know them today? Do Americans remember cinema star Richard Arlen or his role in the Academy Award winning Wings? Do today's movie goers realize that Wings is the inspiration for some of the most exciting air combat sequences in the Star Wars series? Williams designed a home purchased by actress Luise Rainer, the first woman to win two Academy Awards. Though later in her life Rainer complained of Hollywood's perpetual quest for money and the symbols of success, her first large American purchase was one of those symbols—a Williams home. For many of these stars, only their films and Williams' designed homes survive.

During her career Corinne Griffith (image 1) reigned as one of the most beautiful women in film. From 1916-1930 she was featured in 100+ silent movies. An astute business woman, Griffith invested her money in commercial property for the rainy-day when her career was over. By 1926 she owned real estate in Los Angeles worth $500,000. Williams designed a number of her commercial properties. (Anthony Slade. Silent Players. 2002)

The Paul Revere Williams Project would like to hear from owners or admirers of properties of these forgotten icons. Can you provide personal photographs? .

This project thanks all of the owners who have contacted us and shared their photos and love of Paul R. Williams.